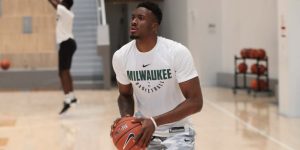 The Bucks officially re-signed Brook Lopez on Saturday and will soon add his twin brother, Robin, in a signing that will soon be inked. Now, they’re set to bring in another brother as Thanasis Antetokounmpo, the 26-year-old brother of Milwaukee’s superstar and league MVP Giannis Antetokounmpo, will sign a guaranteed two-year, minimum contract, a source confirmed to the Journal Sentinel.
Thanasis, a 6-foot-7 wing, will make for an interesting fit on the Bucks’ roster. He has the size, athleticism and defensive toughness to fill a hole on the wing, but he lacks the three-point shooting that was critical to the Bucks’ offensive attack last season. With only limited NBA experience, Thanasis could potentially split time between the Bucks and the Wisconsin Herd to further develop his game.
More than roster fit, Thanasis’ addition could be geared toward keeping Giannis happy. The two brothers — the eldest among the four Greek-born Antetokounmpo sons — are incredibly close.
Check BetRegal.com and find the best online betting site.
They came to the United States together in 2013, with Giannis using any opportunity he had during his rookie season to get together with Thanasis, who was playing for the Delaware 87ers in the G League.
The chance to play in the NBA with his brother, Thanasis — his closest confidant — is undoubtedly a dream come true for the both of them. Making that happen is a noteworthy gesture from the Bucks as it pertains to their biggest star. The two have already played together for the Greek national team, something they’ll do again this summer at the FIBA World Cup in China.
Next summer, Giannis will be eligible to sign a five-year, $253 million supermax extension with the Bucks, a contract that would be the richest in league history and would keep him in Milwaukee as the franchise cornerstone.
Get all the latest Betting and Sport News updates on your social media outlets. Find us on both Facebook and Google+
Other teams, knowing that Giannis has a decision to make, are already looking ahead to the summer of 2021 when Giannis could potentially be a free agent should he turn down the supermax.