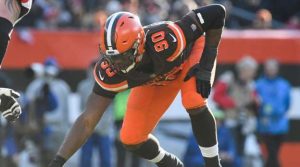 The Kansas City Chiefs have acquired edge rusher Emmanuel Ogbah from Cleveland in a swap for safety Eric Murray, who was originally drafted by current Browns general manager John Dorsey.
Ogbah did not report for the start of the Browns’ offseason program Monday, a sign that a trade was in the works. The 25-year-old defensive end was picked 32nd overall in the 2016 draft, and he had 12½ sacks while starting all 40 games he played over the past three seasons.
“Ogbah didn’t show, and I’d rather talk about the guys that are here,” Browns coach Freddie Kitchens said. I’m sure he’s got his reasons. I don’t know.”
The Chiefs previously signed defensive end Alex Okafor during free agency and the additions of Okafor and Ogbah come after Kansas City parted ways with outside linebackers Justin Houston, who later signed a free-agent deal with the Indianapolis Colts, and Dee Ford, whom the Chiefs traded to the San Francisco 49ers.
Check BetRegal.com and find the best online betting site.
Breeland Speaks and Alex Okafor are the Chiefs’ likely starters at defensive end. Ogbah could provide some much-needed depth.
Meanwhile, Cleveland gets a player Dorsey knows well. Murray entered the league in 2016 as a fourth-round draft pick with the Chiefs while Dorsey served as the general manager.
The 25-year-old Murray, a converted college cornerback, provides versatility on the back end of coverage and replaces safety Derrick Kindred, who was released earlier Monday.
On his three-year career, Murray has appeared in 45 games with 11 starts, totaling 72 tackles, a sack, an interception and seven passes defensed.
Get all the latest Betting and Sport News updates on your social media outlets. Find us on both Facebook and Google+
Kindred, 25, had 33 solo tackles, an interception and a forced fumble in 16 games for the Browns last season. Drafted in the fourth round in 2016 (129th overall), he appeared in 42 games with the Browns, including 17 starts.