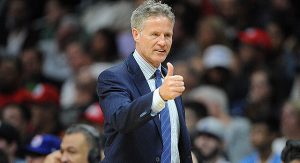 Sixers president Bryan Colangelo said during the team’s exit interviews earlier this month that he planned to work out a new contract for head coach Brett Brown, and it appears the deal is done. Brown and the Sixers have reached an agreement on a three-year extension, a source confirmed to NBC Sports Philadelphia Sixers insider Jessica Camerato. Brown, who was set to enter the final year of his contract, would now be signed through 2022.
After suffering through a 75-253 record during the first four years of the Sixers’ massive rebuild, Brown finally showed what he could do with the right pieces in place this past season. He guided the Sixers to a 52-30 record, the third seed in the Eastern Conference and the franchise’s first playoff series win in six seasons.
“I think he’s taken a big step forward proving that as the talent increases, as the availability of his players is more consistent, and as he can adapt and manipulate that talent, he’s doing a very good job,” Colangelo said.
Check BetRegal.com and find the best online betting site.
Brown had one year left on his contract. The extension is a sign the franchise believes he’s still the right coach to lead the Sixers into Eastern Conference contention.
Under Brown’s watch, Joel Embiid and Ben Simmons have blossomed into two of the top young players in the league. Brown was hired as the Sixers were about to undergo their rebuilding process that became known as ”The Process.”
The Sixers, who finished third in defensive rating and fourth in net rating, proceeded to defeat the Miami Heat in the first round of the playoffs before suffering a second-round defeat at the hands of the Boston Celtics.
Get all the latest Betting and Sport News updates on your social media outlets. Find us on both Facebook and Google+
“Our culture is not to be denied. It is real,” he said at his season-ending press conference. “Players want to play here. Free agents, we can attract. … Our timeline has changed. Our expectations have changed, and that’s a good thing.”

Warriors move to another NBA Finals