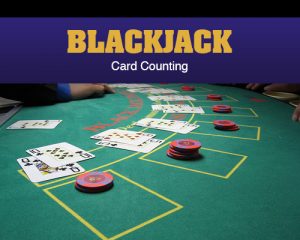 Counting cards is used in blackjack to give a player an edge over the casino. Contrary to popular belief, counting cards doesn’t require any type of “Rain Man”-like savant qualities, nor is it illegal or easy. It’s just highly frowned upon. Therefore, if you start counting cards, you’ll have to learn to be incredibly stealthy. In order to master this skill, an aspiring card counter has to play thousands of hands and know his chosen system inside and out. And even if he or she does everything right, there’s still the risk of getting barred from the casino or suffering through a terrible streak of luck.
We will talk about the fundamentals and a few systems of card counting, as well as methods used by casinos to counter successful advantage players.
The goal of card counting is to keep track of all the cards that have been played, assign them numerical values, and arrive at an overall total. When this value favors the player, larger wagers should be made. When it favors the dealer, however, the player knows to be more conservative.
Get all the latest Betting and Poker updates on your social media outlets. Find us on Facebook!
The general premise for card counting uses the Hi-Lo strategy. High cards are given a specific value (-1) and low cards are given a specific value (+1). Low cards favor the dealer, as common blackjack rules require the dealer to hit with less than 16. If they receive low cards, then they’re more likely to get near 21 without busting.
High cards, meanwhile, often favor the player. They can result in the dealer busting, as well as increasing the odds of a player blackjack. Tens and face cards are also useful when deciding to double down, which allows the initial wager to be increased by up to 100% in exchange for one additional card.
Blackjack card counting teams face all kinds of peril, from suspicious police officers to dishonest teammates. Their shelf life is often short because of these reasons, although a cold streak at the tables is often the biggest culprit.
There are, however, a few teams that have managed to hang around long enough to win millions from the casinos. While most prefer anonymity, the two groups listed below have become legendary and used their fame for financial gain outside the casinos.
There are many card counting systems, but seven are the most popular.
– Hi-Lo – Add +1 to the count for the two through six cards; 0 for seven through nine;     1 for aces and 10 value cards. 97% BC.
– K-O – +1 for one through seven cards; 0 for eight and nine; -1 for aces and ten value cards. 98% BC.
– Halves – +.5 for the two card; +1 for three, four, and six; +1.5 for five; +.5 for the seven card; 0 for eight; -.5 for nine; -1 for tens and aces. 99% BC.
– Omega II – +1 for two, three, and seven; +2 for four, five, and six; 0 for eight and ace; -1 for nine; -2 for tens. 92% BC.
– Zen – +1 for two, three, and seven; +2 for four, five, and six; 0 for eight and nine; -2 for tens; -1 for ace. 96% BC.
– Hi-Opt I – 0 for two, seven, eight, nine, and ace; +1 for three, four, five, and six; -1 for tens. 88% BC.
– Hi-Opt II – +1 for two, three, six, and seven; 0 for eight, nine, and ace; +2 for four and five; -2 for tens.
Start playing casino games at RegalPoker.com Online Virtual Casino today!