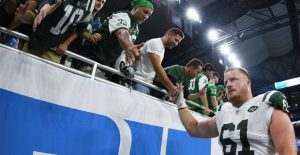 The Buffalo Bills announced on Tuesday that they’ve officially begun adding to their offensive line in the 2019 offseason.
Spencer Long came to terms with the Bills on a three-year contract, according to a release from the team.
Long, who was a third-round pick of the Washington Redskins in 2014, spent the first four years of his career there, before spending last season with the New York Jets.
According toPro Football Focus, Long struggled during his lone season with the Jets in 2018. His overall grade from the football analytics outlet was a 45.4 last season. Bills centers last season in Russell Bodine and Ryan Groy graded out as a 61.6 and 46.7, respectively.
Check BetRegal.com and find the best online betting site.
However, in 2017, Long graded well with the Redskins. The 28-year-old center who can also play guard allowed only five QB pressures in 2017 and had a 98.2 pass-blocking grade. Long’s skills appear to link with issues the Bills have recently ranked along the offensive line.
PFF graded the Bills’ offensive line last season as the No. 26 unit in the NFL. Their run-blocking lagged though, slating as the NFL’s second-worst run blockers in the NFL for most of the season.
Long has started 44 of 53 career games played and struggled with injuries in recent years. He missed the last three games last season due to a finger injury and battled knee and quad injuries in 2017.
With John Miller a pending free agent at right guard, signing Long could indicate Buffalo is moving on from him if he starts. Groy is also a pending free agent if Long pans out as a depth move.
Get all the latest Betting and Sport News updates on your social media outlets. Find us on both Facebook and Google+
The Bills on Tuesday also re-signed cornerback Lafayette Pitts to a one-year deal. Pitts, who played Buffalo’s second-most special teams last season, was set to become a restricted free agent in March.