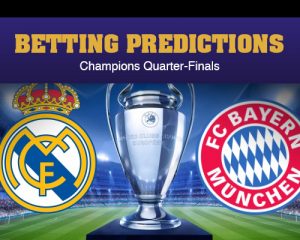 Bayern Munich and Real Madrid form one of the Champions League’s richest and most intense historical rivalries, now Wednesday evening will see the 23rd meeting between these two sides, their rivalry goes back to 2001-02 when the German champions defeated Real in the Champions League semi-finals with an impressively defiant display.
UEFA club rankings may be purely mathematical constructs but they are pretty unequivocal on this one. They look at the past five seasons, and they show that Real Madrid are first and Bayern Munich are second. We’re talking the likely champions in Spain against the all-but-anointed winners in Germany.
Nobody has won the Champions League more often, Real Madrid are guided to “La Decima,” their 10th European Cup, three years ago. His assistant that season, Zinedine Zidane, took over at the Bernabeu 16 months back and won it again.
Now heading into this clash, the German side took another big step towards retaining the Bundesliga yet again on Saturday with a convincing 4-1 victory over rivals Borussia Dortmund, which was aided greatly by them scoring two goals in the opening ten minutes of the game.
This saw them bounce back from a disappointing 1-0 loss at Hoffenheim on Tuesday and puts them ten points clear of RB Leipzig in 2nd, so it certainly looks like the German title is remaining in Munich.
They have won eight of their last nine matches in all competitions and scored an incredible 33 goals in this period, conceding just three times. At home they’re even better, winning their last seven on the bounce and only failing to win three times all season, with no defeats.
Bayern have scored 30 goals in their last seven home games, including their 5-1 battering of Arsenal in the Champions League, which they swiftly followed with a 5-1 hammering of them at the Emirates, to get them to this stage in the competition. They have won all four of their home games in the Champions League and scored 15 goals in the process.
Get all the latest Sports Betting updates on your social media outlets. Find us on Facebook!
Real Madrid beat Napoli 6-2 on aggregate in the last round of the Champions League and find themselves three points clear at the top of La Liga with a game in hand on 2nd place Barcelona.
They did struggle on Saturday when arch rivals Atletico Madrid came to visit the Bernabeu and had to settle for a 1-1 draw. They are unbeaten in nine games in all competitions though, winning six of them.
Away from home they have won five matches in a row, but prior to that they had won just one of their last five and lost twice. This is down to a rather poor defensive record on the road, which has seen Real Madrid fail to keep a clean sheet in any of their last ten away games.
If you are ready to start making betting predictions, look for Bayern to be steady on the ball, with Madrid satisfied with playing the counter early. Sign up now at BetRegal.com