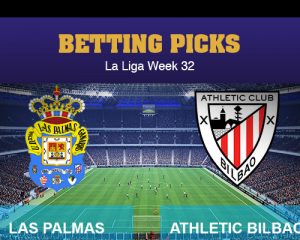 Athletic Bilbao will host Las Palmas in spanish La Liga encounter. Athletic Bilbao seems to have an easy task at this stage, on his own field with Las Palmas.
The performances of both teams are ‘not bad’ this season. Athletico Bilbao is still in the race for a spot in the Europa League and they will give all they’ve got for this spot.
Las Palmas has not really done much this season but to generate disappointments to their fan base. They currently are 13th in La Liga, although they were expected to fight for European seats.
The last round won home with Betis (4-1). They’re excellent on the attack stage, but defense is one of the most modest in the competition.
The story with Las Palmas is that they have been way better on the home pitch throughout the season.
However, Quique Setein and his men hope to catch a break this time after a demolishing 4-1 win over Real Betis on Sunday evening on Canarian islands.
In the eight place of La Liga we find Atletico Bilbao in the fight to catch the last few places in the Europa League. They have been phenomenal on the home court so far in the season. Only Real Madrid and Barcelona managed to take points from San Mames Barria and looking at it from this perspective, the 4/9 odds represent a reasonable price for the home win. However, Ernesto Valverde’s men seem to be a completely different side when they play on the road where they suffered five losses in last seven matches.
Get all the latest Sports Betting updates on your social media outlets. Find us on Facebook!
This includes the 3-1 defeat to Villarreal last Friday at Estadio de la Ceramica.
Interestingly, Athletic Club managed to see off Las Palmas only once in seven matches.
Draw has been the most popular of the outcomes, happening on four occasions.
The Canaries took a 3-1 victory on the home court in the previous meeting thanks to goals from Keving-Prince Boateng, Momo and Jonathan Viera.
81 times have faced these bands so far, and the Basks lead the detachment.
Athletic won 39 of the matches, while the opponent has 19 successes.
In the tour he won Las Palmas (3-1).
BETTING PREDICTION
Both teams have pretty strong lineups in the final third and we have a reason to hope for a great match full of goal scoring chances and goals after all.
We’ll go with the BTTS & Over 2.5 goals with the higher stakes at the evens odds.
BET TIPS
The first betting pick will be Over 2.5 goals & BTTS at the odds of 1/1.
You can also take Las Palmas Over 1.5 team goals at sky-high 5/2 odds.
So today the bet is both to score. An incredible team at home versus a team that never fails to score seems decent to pick both to score. Sign up at BetRegal.com and start making your betting picks.