Betting Lines for the WGC-Mexico Championship 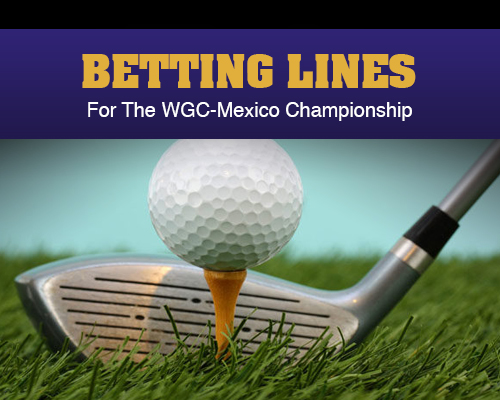 The first World Golf Championships event of the 2016-17 PGA Tour season takes place this weekend, the world’s top golfers will head south of the border for the 2017 staging of the WGC-Mexico Championship in Naucalpan.
The attractive sum of $9.75 million is at stake for the elite field with the champion grabbing not only 550 FedExCup points but also the $1.66 million top prize.
The small field consists of players from the top of the Official World Golf Ranking and the money lists/orders of merit from the six main professional golf tours. This is the 18th time the WGC has been played but this time players will be presented with a new test when the PGA Tour visits Club de Golf Chapultepec for the first time. However, an unfamiliar golf course might not be the biggest challenge facing this elite field.
The course’s clubhouse sits approximately 7,780 feet above sea level. That’s an altitude that’s 50 percent higher than Denver, aka the “Mile-High City.” And yes, that kind of height will have a big impact on how the golf ball travels.
The first reactions have already been shared, the 12-time PGA Tour winner Justin Leonard said during a recent NBC/Golf Channel conference call:
“I live at 8,000 feet, and I know that if I played here every day and I didn’t go to sea level, my equipment would look completely different,”. “And I think you will see guys making adjustments at altitude, especially with driver, possibly with the golf ball. The golf ball doesn’t spin as much, doesn’t curve as much.”
The last time the tour played in anywhere near this altitude was at the 2014 BMW Championship, which was held at Cherry Hills Country Club just outside of Denver.
Get all the latest Sports Betting updates on your social media outlets. Find us on Facebook!
“It becomes a little bit of a math game,” Rickie Fowler said before that event in which he finished T-4, five shots behind winner Billy Horschel. “You just need to trust your numbers.”
That’s what gofers need to worry about but here’s what we, punters must address, betting lines. And the favorites are up already: Dustin Johnson (+650) and Jordan Spieth (+800)
There’s no hotter golfer in the world right now than American Dustin Johnson. The newly-minted world no. 1 has five top-6 finishes in his last six worldwide starts, including a stirring five-shot win at the Genesis Open a couple of weeks ago. On the season, Johnson leads the PGA Tour in both strokes gained: tee-to-green (2.177) and total strokes gained off-the-tee (1.325). He is pegged at +650 to win the WGC-Mexico Championship this week.
If there’s one player, though, who can stop Johnson this week, it’s got to be his fellow Ryder Cup star Jordan Spieth. The two-time major champion has been playing some excellent golf of late as well, nabbing top-10 finishes in his last five worldwide starts, including victories at the Australian Open and Pebble Beach Pro-Am. Spieth currently leads the PGA Tour in GIR and fifth in birdie-or-better percentage. His odds of winning the WGC-Mexico Championship are priced at +800. All the betting lines for the WGC-Mexico Championship are available at Betregal.com