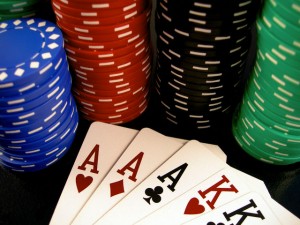 Check Regal Poker for Latest Poker News, poker strategy tips and more
To understand a side pot, you need to know what they other pots, which is fairly simple, as the answer is only one. The Main pot. In a typical poker hand, players will either ante, or pay blinds, then then cards are dealt, and the first round of betting commences. When everyone has enough money, then the Main pot is the only pot that everyone plays for and is eligible to win.
A side pot doesn’t come into play until someone doesn’t have enough money to cover an entire bet, or they are out of chips, and there are more rounds of betting that other players participate, but the “all-in” player cannot.
Here is an example of a side pot:
Player 1: 800
Player 2: 10,000
Player 3: 15,000
Player 4: 20,000
At Regal Poker you will find the best articles about how to play poker, visit us and check out our promotions we offer you the best online poker games.
The blinds are 500/1000, with an ante of 50. With ten players at the table, there are 500 in antes in the pot, plus the blinds. Player one decides to call (but he doesn’t have enough chips for the big blind, so he is all-in with his remaining 750).
Player two raises to 3000, and players three and four call the 3000. Everyone else folds, so the total pot is 11750, but player one can’t win all of that. He started the hand with only 800 chips, so that is the maximum he can win from each other player.
Each player put a 50-chip ante in, so player one can win those. The small blind put in 500 more, and player one has enough chips to cover that, so he can win those. The big blind put in 1000 besides the ante, but player one only had 750 after the ante, so he can only win 750 out of the 1000. Players two, three, and four each put in 3000 besides the ante. Player one can win 750 from each of them. Player one can win a total of 4000 chips, plus get his own 750 back, so the main pot is 4750. Right now, the side pot is the remainder, or 7000 chips. At this point, the situation is:
Main pot: 4750
Side pot: 7000
Player one: all-in
Player two: 7,000 chips left
Player three: 12,000 chips left
Player four: 17,000 chips left
After the flop, player two goes all-in for 7000 more. Player three calls, and player four raises all-in. Player four’s raise was for 10,000 more, but player three only has 5,000 left, and calls all-in. The extra 5,000 bet by player four is returned to her and is out of the play. She will have at least 5,000 at the end of this hand no matter what happens.
The pots now are:
Main pot: 4750 (for all four players)
Side pot: 28,000 (for players two, three, and four)
Side pot: 10,000 (for players three and four).
If player four has the best hand of all, she wins all the pots and the other three are down to zero. If player three has the best hand of all, he wins all the pots, player four is down to 5,000, and players one and two are at zero.
If player two has the best overall hand, player one is down to zero. Player two wins the main pot and the first side pot. Players three and four then compare hands to see who gets the 10,000-chip side pot.
If player one has the best overall hand, he wins only the main pot. The other three then compare hands to find the winner of the first side pot. Players three and four then compete for the second side pot.
In a tournament, when one player is all-in, and there are multiple other players, often times none of the other players will “Bet into the dry side pot.” The reason for this is that when you’ve got one person against the ropes, the more fists that can punch them, the better. Betting at this point reduces the odds that you will knock that person out of the tournament. Just know that this is considered collusion or soft-play, and any words spoken regarding not betting will be met with resistance. But, it’s just the smart play.
Conversely, in a cash game, it is a great idea to bet up a side pot, especially when you know that you have a paying customer with a lesson hand. Often times, a side pot will be relatively large in comparison to the main pot. Betting up the side pot to counter the losses to the main pot can negate the losses of the main pot.
Don’t miss our special articles about Texas Hold’em and blackjack, become the best player that you can be! Get all the latest PokerNews updates on your social media outlets. Follow us on Twitter and find us on both Facebook and Google+!

What a Side Pot is?