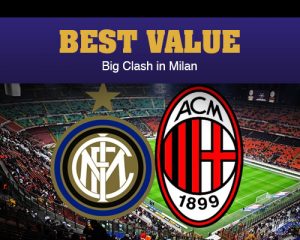 The biggest fixture of the Italian weekend will certainly be the clash between AC Milan and Inter on Sunday. This is another of the big European club matches that are happening this weekend along with Atletico v Real Madrid in Spain, Dortmund v Bayern Munich in Germany and Man UTd vs. Arsenal in the Premier League and the best value sportsbook for all this football action is without a doubt regalpoker.com
This Milan derby is of big importance to both as AC Milan need to deliver the three points in order to keep themselves on the tails of league leaders Juventus. And there is hope for them, following their magnificent start to the season. As things stand, they’re on course for a spot in the UEFA Champions League next season. AC have a brilliant record at the San Siro this campaign. They’ve been relying on their domestic form to continue their spurt for a top three zone. Head coach Vincenzo Montella’s team have taken 60% of their points this season at their stadium, while they’ve scored 58% of their goals here, and conceded just 40% of their total at the San Siro. That’s a record which Inter will have a tough time beating.
Get all the latest Sports Betting updates on your social media outlets. Find us on Facebook!
On the other side of the fence, Inter are currently in the middle of a season-long crisis. They are looking to shake themselves into a more positive mindset after such a tough opening to the season, which includes the third change of their full-time manager. They appointed the Italian specialist Stefano Pioli as their new coach during the recent international break. The ex Lazio manager is seen as a safe pair of hands to give the club some stability as he tries to pick up the pieces left by Frank De Boer. He certainly faces a baptism of fire in his debut game as Inter head coach because losing this one would be pretty damaging to Inter.
AC Milan are favourites for the derby on Sunday and they are going along pretty well, because they are still in a decent position to make an assault on the league title.
Just one of the last 10 meetings between these two have seen more than two goals. That one was a 3-0 victory for AC in January this year.
They have been superb at the San Siro this term with a W5 D1 at home this season in the league and notably in that sequence there was a win over Juventus as well. So Milan are doing alright at the moment and they have suffered just the one loss in their nine league games this season (W7 D1 L1).
While they have found the winning touch going forward, they have been tight at the back too with three clean sheets in their last four at the San Siro. You can go with AC Milan to win to nil at a price of 7/2 with the best value sportsbook.