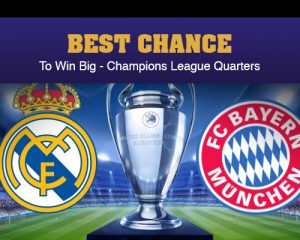 This Tuesday football gives us one of the best chances to win big when the second leg of the champions league quarters kick off. The Real Madrid host Bayern Munich at the Santiago Bernabeu after beating the German side 1-2 at the Allianz Arena last Wednesday. Their current lead is fairly valuable considering how important away goals are in the Champions League and yet Los Blancos will have to take this game very seriously if they want to play in the Semifinals for the seventh straight year.
To date, each team has progressed in the knockout stages of the competition against each other an equal five times, and the Spanish aristocrats are perfectly placed to edge ahead in the head-to-head record at the Bernabeu.
In the first leg of the stage last week, Real Madrid shocked the Bundesliga leaders Bayern Munich as they recovered from an early setback to win 2-1 at the Allianz, courtesy of a second half brace by Cristiano Ronaldo. This puts the Spanish giants in a fantastic position to make it through to the semi finals as they look to retain the Champions League.
The hosts followed that win with an unconvincing victory away to Sporting Gijon, beating them 3-2 after going behind twice and relying on a 90th minute Isco winner to keep them three points clear at the top of La Liga.
With this win Real Madrid gets to 11 away games without losing, 9 of them ended in victory. Then at home, things are very similar, with ten wins, two draws, and one defeat in their last 13 games, with that shock 2-1 loss to Celta Vigo being their only defeat at home all season.
Get all the latest Sports Betting updates on your social media outlets. Find us on Facebook!
On the other hand, Bayern Munich find themselves eight points clear at the top of the Bundesliga, but their hopes of claiming the Champions League are in extreme jeopardy at the moment. They followed their defeat to Real Madrid with a goalless draw away at Bayer Leverkusen, which isn’t the best way to prepare for a trip to the Bernebeu.
They have actually only won one of their last four games in all competitions now, and away from home they have only won three of their last six. Their Champions League form on the road doesn’t paint a prettier picture either, with just two of their trips away this season ending in victory and just four wins away from home in their last 14 Champions League matches.
Let’s see another summary of where the teams stand:
Real Madrid have won five and lost two of their last seven meetings with Bayern Munich.
Bayern Munich have lost 60% of their last five trips away in the Champions League, whilst Real Madrid have won 83% of their last 12 at home in the competition and have won 79% of their last 19 home games in all competitions.
It comes as no surprise that Los Blancos are favored in this one and as far as the overall result goes, odds of 11/8 for a Real Madrid win look fantastic value given their form with a 3-1 correct score predictions at 16/1. This is your best chance to win big with the champions league quarters at BetRegal.net

Barcelona’s All Or Nothing Betting Value