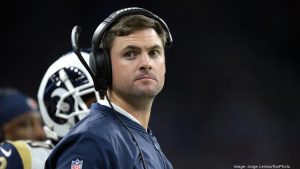 The Cincinnati Bengals have named Zac Taylor to be the team’s next head coach, replacing Marvin Lewis.
The 35-year-old Taylor, who becomes the NFL’s second-youngest head coach, was quarterbacks coach for the Los Angeles Rams before taking the Bengals top job.
The Bengals made the official announcement on Monday afternoon. Taylor had flown to Cincinnati on Monday morning, a day after the Rams lost in the Super Bowl to the New England Patriots 13-3, to finalize a contract.
“I am happy and fortunate to join the Cincinnati Bengals as head coach,” Taylor said in a news release. “This is a great organization with good people and a rich history, and I am excited to get started. I am looking to add to that history by setting high standards and holding everyone here accountable to those standards. There is a lot of work to do, and this is day one. We’re going to attack every day with enthusiasm to get this team ready to go.”
Check BetRegal.com and find the best online betting site.
Taylor will talk to the media at a news conference on Tuesday afternoon.
“Zac is a bright coach with an offensive mind and background, which is important to have in today’s NFL,” Bengals president Mike Brown said in the release. “And he’s young. He embraces new ideas and new ways to do things, which will be a good thing for us. I believe our team will be exciting and fun to watch with him at the helm.”
The Rams finished second in the NFL in offensive yards (421.1 per game) and scoring (32.9 per game) this season, but they tied the Super Bowl record for fewest points scored by one team in a game.
Get all the latest Betting and Sport News updates on your social media outlets. Find us on both Facebook and Google+
Their regular-season results easily topped the Bengals, who ranked 26th in total yards with 310.8 per game and 17th in scoring with 23 points per game.

Portland agrees to deal with Cleveland for Rodney Hood