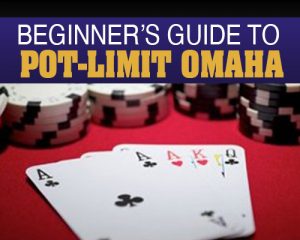 Omaha hold’em, often called simply Omaha, is an exciting poker game that is strikingly similar to Texas hold’em, although it does have a number of differences to set it apart.
Pot-Limit Omaha is the second-most-common form of poker in the world today. Before the 2003 poker boom, Omaha was much more prevalent in American cardrooms, and was the most popular cash game in many rooms around Europe.
Texas Hold’em has become the poker standard across the world, leaving Omaha the most popular alternate game.

If you want to learn more about poker, don’t forget to visit our How to play section!
Most basic rules of PLO are similar to those of Texas Hold’em. Before every hand, two players have to post the blinds and there is a flop, a turn and a river, just as in Texas Hold’em. However, the only difference between the two is a significant one: As mentioned earlier, in PLO you are dealt four hole cards instead of just two.
On top of that, you always have to use two hole cards and three community cards to make your hand at the showdown. Unlike in Texas Hold’em, you can’t simply choose the best 5 of the 7 cards. That’s why the worst starting hands in Omaha are quads in your hole cards. You can only use two of these cards, but have no chance of improving your hand.
Another aspect that is special about PLO is of course the bet size: It is not unlimited as in No Limit, but there is no specified limit as in Fixed Limit either. The maximum raise always depends on the current pot size. As a rule of thumb you can keep in mind that a pot size raise equals the current pot + three times your opponent’s bet. If there are $25 in the pot and your opponent bets $25, you can raise to a maximum pot size of 25 + 3×25 (75) = $100.

Pot-limit Omaha is a complex game, which makes it difficult to come up with the perfect strategy for playing it. However, there are a number of pointers that you can remember that can form the basis for a solid PLO strategy: