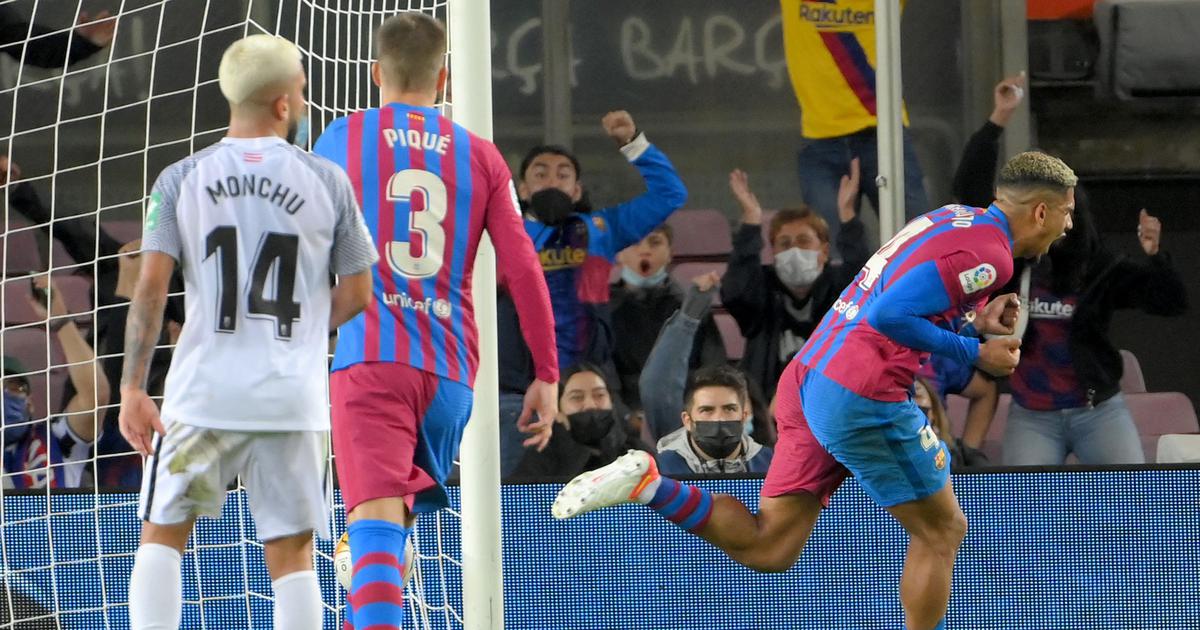 Ronald Araujo’s late header salvaged a 1-1 draw for Barcelona versus Granada at the Camp Nou on Monday night.

Ronald Koeman picked a young XI for the match, with 33-year-old Sergio Busquets the only player over 30, while Philippe Coutinho made his first start for Barca since Dec. 19, 2020.

Granada took the lead a mere 88 seconds into the game when Domingos Duarte was picked out at the far post with a stellar cross from Sergio Escudero and he made no mistake about the finish, powering a header past Marc-Andre ter Stegen.

The hosts spent most of the remainder of the first half in Granada’s end, but could find no end product despite peppering Luís Maximiano’s goal with a late flurry right before the break.

Searching for goals, Koeman made two changes, bringing on Luuk de Jong for Sergi Roberto at the start of the second half and substituting Gavi for Coutinho on the hour mark as Barca continued to trail by a goal.

De Jong had a golden chance to equalize just before 80 minutes, but he impossibly headed over the bar from point-blank range from an outswinging Memphis Depay cross.

With a loss looking likely for Koeman’s side, Gavi settled a loose ball in the area and deftly chipped it back in front of goal where Araujo rose and met the ball and redirected it past Maximiano to save a point for Barcelona.

The result sees Barcelona into seventh place in LaLiga on eight points, while Granada remain in 17th place on three points, barely above the relegation places in Spain’s top flight.

“They [Granada] wasted time from as soon as they scored,” bemoaned Koeman. “There wasn’t a lot of space to play short, delicate balls as they defended with every man back.

“There was space on the wings to cross, and we had tall players in there and that’s what we did. At least we managed to get a draw, even if we have dropped two points.”

When asked about the team’s style of play, Koeman candidly stated this wasn’t the Barca team of old.

“It depends on what we have available,” Koeman said after the match. “How are we going to play tiki taki (sic) if there is no space? Look at the squad. We did what we have to do. With a bit more time, we would have won.

“Today’s Barcelona is not the Barca of eight years ago. We play the Barca way, but we don’t have players to play one-on-one or with pace. You can’t be unhappy with the team’s attitude.

“We played 4-3-3, but we didn’t have pace out wide. Neither Coutinho nor Demir are that player. They’re not Ansu [Fati] or [Ousmane] Dembele, so we have to look for another way.”