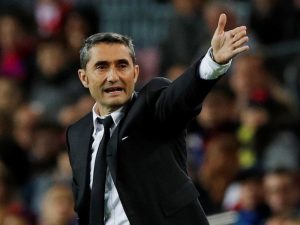 Ernesto Valverde says he understands why some Barcelona fans whistled his team following the disappointing goalless draw with Slavia Prague in the Champions League.

Barca would have taken a major step towards the knockout stages of the competition with a win at the Nou Camp.

But Valverde’s side, who struck the woodwork through Lionel Messi, were unable to break down the Czech champions in a game which saw both sides have goals disallowed for offside.

The stalemate followed Saturday’s surprise 3-1 loss at Levante to increase the pressure on head coach Valverde.

“It’s OK for people to demand (more),” said Valverde after the game, according to Marca.

“You always like to win. Today, the truth is that we have not been right (when it has come to converting the) clear chances that we have had.

“They, without creating clear opportunities, caused danger when they stole the ball from us because they came out very fast against us (on the counter attack).

“We couldn’t convert the dominance we had into opportunities.”

Barcelona are still top of Group F, although Borussia Dortmund decreased their advantage to a single point later on Tuesday evening by coming from two goals down to beat Inter Milan 3-2 in Germany.

“The other day we lost against Levante and we understand that it wasn’t one of our best games,” he added.

“Neither that one nor today’s. We haven’t played two perfect games and we know that there is a lot of pressure towards the team and we have to bounce back.

A frustrating evening for the Spanish champions was compounded by an injury to left-back Jordi Alba, who had to be substituted just after half-time.