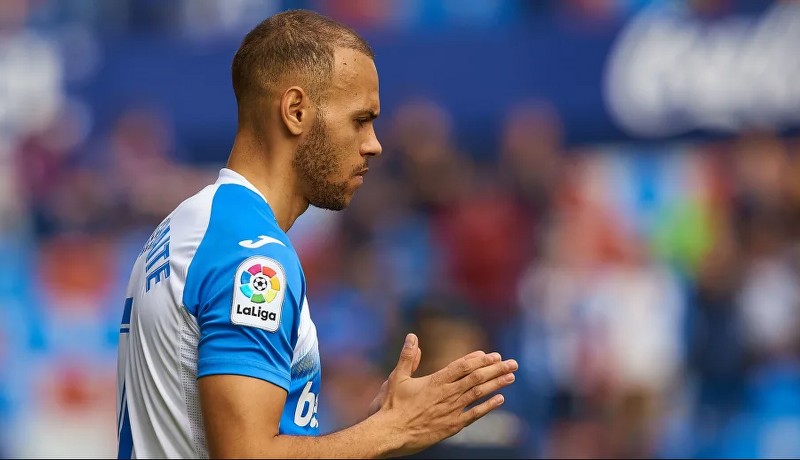 Barcelona are facing a backlash from Leganes after they sealed a £16million move for their star striker Martin Braithwaite outside of the regular transfer window.

Barca were granted permission to sign an emergency striker after a series of injuries left them with just three forwards to carry them through to the end of the season.

But Leganes, 19th in LaLiga and facing relegation, have been left in the lurch with no option to replace a striker who has scored six of their 18 league goals this season.

After Barcelona paid up Braithwaite’s £16m release clause, secured him on a four-and-a-half year deal and slapped their own £250m clause on him, Leganes chief Martin Ortega said: ‘We consider that there is a regulation that is unfair, from which Barcelona has benefited.

‘The one who is damaged by this is Leganes. We want to raise our voice. The damage is enormous.

‘We do not understand the current regulation in any way. That a team, because a long-term player is injured, may unilaterally, transfer that problem 100 per cent to Leganes.’

The former Middlesbrough striker, who scored just nine goals in 40 appearances on Teeside, will be unveiled later on Thursday where he will be presented to the press at 7.15pm local time.

Barcelona currently have Ousmane Dembele and Luis Suarez both out injured for the forseeable future.

Dembele has been ruled out of action for six months with a hamstring tear after undergoing surgery in Finland last week while Suarez is unlikely to return from a knee injury this season.

The green light was given for them to sign a new player on Monday after a LaLiga committee confirmed the injury as a long-term lay-off, with league rules then allowing them to sign a replacement. All players in Spain have buy-out clauses, which has ultimately seen Braithwaite move to the Nou Camp.

Barcelona welcome Eibar to the Nou Camp on Saturday, when Braithwaite is expected to make his debut.