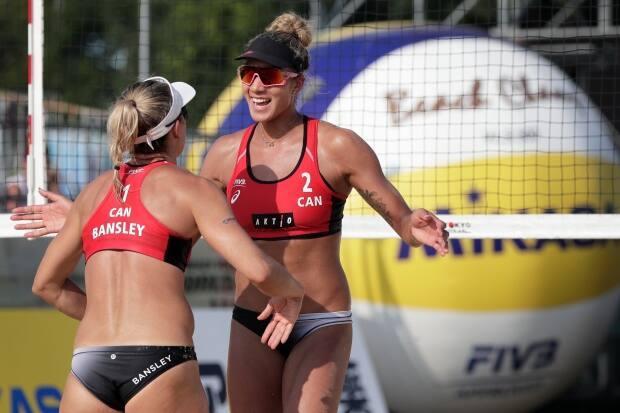 Heather Bansley and Brandie Wilkerson came out on top versus fellow Canadians Sarah Pavan and Melissa Humana-Paredes by a score of 2-1 (25-23, 14-21, 15-9) at the Ostrava Beach Open on Thursday.

Bansley (Toronto) and Wilkerson (Toronto) were able to close out a tight first set, but were challenged quickly once Pavan (Kitchener, Ont.) and Humana-Paredes (Toronto) turned the tide of the match with a seven-point win in the second set.

Bansley and Wilkerson rose to the occasion in the final set, returning the favor with a six-point victory, picking up their second victory of the day.

Canadians Megan and Nicole McNamara continued their winning ways with a two-set victory over Latvia’s Tina Graudina and Anastasija Kravcenoka, with a final score of 2-0 (22-20, 21-17) earlier in the day.

Their second match resulted in a 2-0 (21-15, 21-15) loss to Russia’s Nadezda Makroguzova and Svetlana Kholomina. On the men’s side, Grant O’Gorman from Scarborough and Ben Saxton from Calgary beat Jan Pokersnik and Nejic Zemljak of Slovakia 2-0.

The cruised to a 21-16 and 21-13 to earn the triumph. In the second game of the day for the pair, they had a much closer match versus Marco Krattiger and Florian Breer of Switzerland as they earned a 2-1 win.