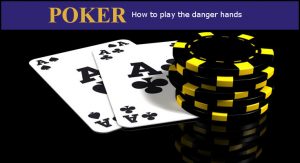 If something in life looks too good to be true, it normally is. This logic applies to poker hands too and there are a few in particular that you need to be especially wary of.
What do we mean by ‘danger hands’? Danger hands are poker hands that you shouldn’t play, but do because they look seductive, fun or profitable. Until they get you into trouble! They suck you into playing even when you know you probably shouldn’t and then make you pay with a tower of chips.
Here are the ones to look out for:

Pocket aces. The ultimate hole cards, or so you’d think! The value of this hand is huge early on, but it drops soon afterwards because anything can happen on the flop. Someone might land two pairs, three-of-a-kind or even set up a straight or flush draw that they can complete on the river.
In no-limit or pot-limit games players often work with ‘implied odds’. They need to call pre-flop and then work on making a better hand or draw before raising.
So if you’re going to play aces, play them strong early doors and you’ll deny your opponents the implied odds. This tactic will also give you a good idea of what any callers have made on the flop.

The ‘Hooks’ are so called for more than one reason, as they can reel you into losing a fortune and are generally regarded as one of the most difficult hands to play in Hold’em. If you raise with them and are called, the chances are that the flop will contain one or more overcards. And even if it doesn’t, there is always the danger of then losing a fortune to aces, kings, or queens. If someone re-raises you, it’s likely that they hold either a bigger pair or overcards, such as AKor AQ, so you are either a small favourite or a big underdog.
In poker, this is a situation you are constantly trying to avoid, so jacks more than any pair are like chameleons. For example, if you know someone often plays small pairs or weak aces, they can be a great hand to come over the top with. However, if there has already been a raise and a re-raise to you, in most games you would sooner light a fire with them than get involved.

Play these early in big-bet tournaments or cash games where the money is deep. But once you get to the flop, here’s some professional advice, ‘No set, no bet.’
Click here to find out more about playing pocket pairs.

The weak ace is exactly what it sounds like in most situations, despite some players and commentators’ predilections to get excited about it. If you raise and are re-raised, you are forced to fold, and if you get to the flop to see an ace you may have ‘kicker trouble’. Similarly, hitting the low kicker is rarely enough to continue in the hand, and you will frequently miss altogether.
In short, then, it’s one of the main danger hands in Hold’em and unless you’re an expert, you play it at your peril. Remember, a hand with a hole in it is frequently worse than no hand at all (with no hand you lose no money). Playing the weak ace after the flop can often feel like the equivalent of walking around with one leg broken.

This tricky hand needs a lesson all by itself. Click here to find out all about playing king-jack.

Face cards may look pretty and appealing but they can often get you into trouble. Although they are high cards they are always losing to any ace pre-flop, and can frequently be in a tight spot if the ace’s kicker ‘duplicates’ one of them (such as K-Q vs A-Q), especially if played all-in. They are moderate, defensive hands if you need to act in a hurry and they are playable in late position or if suited. However, just don’t fall for the impression that a nice paint job means you’ll find sound engineering underneath.

Suited connectors, such as 9♥ 8♥ or 6♠ 7♠, can be useful hands as long as they’re played carefully and cheaply. That’s because no-one will ever suspect a straight on a flop of 6-7-10, or a monster draw on one of A♠ 5♥ 6♥. However, they also suffer from the slim possibility of putting you in a complete lock against a higher straight or flush and guaranteeing you lose all your chips.
With straight draws you need to remember what other hands you could be running into. For example, 9-8 looks great with a flop of Q-J-10, until someone turns up A-K.

How to play Seven Card Stud