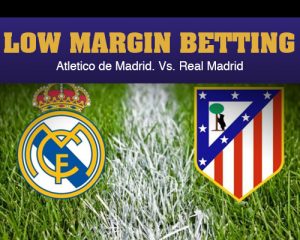 A real city clash will take place this weekend when Real Madrid and Atletico Madrid lock horns again at the Vicente Calderón. Tickets are sold, hopes are up and low margin betting lines are available. Betting tips suggest that there will be goals at both ends here with both teams gunning for a win to maintain feint title hopes.
Atletico Madrid midfielder Koke says his team cannot afford to fall nine points behind in the La Liga title race by losing next weekend’s “dangerous derbi” at home to leaders Real Madrid.
Get all the latest Sports Betting updates on your social media outlets. Find us on Facebook!
Merengues face a decisive moment with their stars. Sergio Ramos is one step closer to his return after resuming training. The team has received some encouraging news on the injury front ahead of this weekend’s clash as Sergio Ramos has resumed squad training after a spell on the sidelines with a knee injury.
The Spain defender last featured for Madrid in the 2-2 Champions League draw with Borussia Dortmund on September 27.
But he has seemingly recovered in time to feature against Atletico, taking part in Monday’s training session without any noteworthy issues and handing coach Zinedine Zidane a timely boost.
Keylor Navas could prove to be the most important Real Madrid player on the pitch. The Real keeper hasn’t been at his best so far this season, having made his comeback from surgery to correct an ankle problem, and he has struggled to replicate the form that during the last campaign provided the team with such a resolute last line of defence.
Navas missed the opening games of the season when Kiko Casilla deputised ably enough to instigate a mini-debate in the pro-Madrid sports press over whether the Costa Rica international was assured of walking straight back into the team. Indeed, Casilla retained his place for the Liga trip to Las Palmas, with Navas kept in reserve for the Champions League match against Borussia Dortmund a few days later.
Head-to-Head
Real Madrid have won only 1 of the last 11 meetings between the clubs. Atletico have won on their last two league visits to the Bernabeu.
Both teams have scored in 56% of Real Madrid’s matches this season. Atletico have failed to score in only 15% of their away games.
Diego Simeone’s Atletico team have lost two of their last three league games to slip to fifth in the table, six points behind Zinedine Zidane’s unbeaten side, who are two points ahead of second-placed Barcelona at the head of the standings.
Ahead of the game at the Vicente Calderon on Saturday, Koke told Marca that a draw was the least his team could take from the game and they were setting out to get all three points.
Koke said the 2016-17 season has so far been “a bit crazy” with lots of movement as the top teams have all dropped points.
Saturday’s clash will be Atletico’s first meeting with Madrid since May’s second Champions League final defeat to their neighbors in just three years. Low margin betting lines for this match are available at regalpoker.com