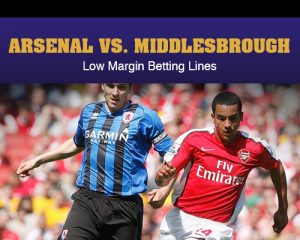 The premier League sees six English top-flight matches go ahead in the traditional Saturday 3.00pm start. RegalPoker has low margin betting lines for punters to join in the action, and. Starting with Middlesbrough, that face a big week at Rockliffe Park at Arsenal, in front of the usual demanding home crowd.

After the recent defeat to Watford, Aitor Karanka’s side, left the riverside bruised and hurting, Teesside was hurting, the disappointment was obvious, and the subsequent criticism stinging. But the club have not got time to feel sorry for themselves – they face Arsenal, Manchester City and Chelsea in three of their next four matches.

With a testing trip to the Emirates also comes an opportunity, and Boro will be able to head to North London as underdogs, completely written off and expected by most to receive a hammering.

Aitor Karanka’s side have shown previously that, on their day, they can hurt the top Premier League teams – but any degree of self-pity will be sensed and pounced upon by the Gunners. They need to get it all out of their system this week.

Karanka admitted that he tried to lift the players in the immediate aftermath of the Watford defeat, in what was a subdued dressing room. He’ll need to keep doing that throughout the week to give Middlesbrough a fighting chance next weekend.

Things for Arsenal seem quite different, as they have a show-stopping domestic run that includes wins over Watford, Southampton, Hull, Chelsea, Burnley and Swansea, with no less than 16 goals scored along the way. The Gunners show just one defeat from their first eight outings which came on the opening day of the season following a dramatic 4-3 reverse to Liverpool.

Get all the latest Sports Betting updates on your social media outlets. Find us on Facebook!

Lines up for the match

This will be the first meeting of Arsenal and Middlesbrough since February 2015 when the locals claimed a 2-0 FA Cup verdict. Olivier Giroud got both goals that day and he’s 9/2 with some bookies to help himself to two or more again here. Each of the last two meetings of Arsenal and Boro at this venue have ended 2-0 and a repeat is deemed to be the most likely outcome at 11/2. The home win by any method can be had at a wafer-thin 2/7 and, although that’s plenty tight, it’s about fair, all things considered.

One positive for Boro is that they have drawn two of their last four with Arsenal and another share of the spoils goes at 11/2 if you’re feeling confident, and just a bit reckless, then the 1-1 correct score is 11/1. Now if you are to find low margin betting lines then regalpoker is your place.

Arsenal have barely put a foot wrong in the league so far this season and even in that Liverpool defeat, they showed bags of character when going down. Arsenal have to learn to win ugly, the inability to do that in previous seasons has held them back.