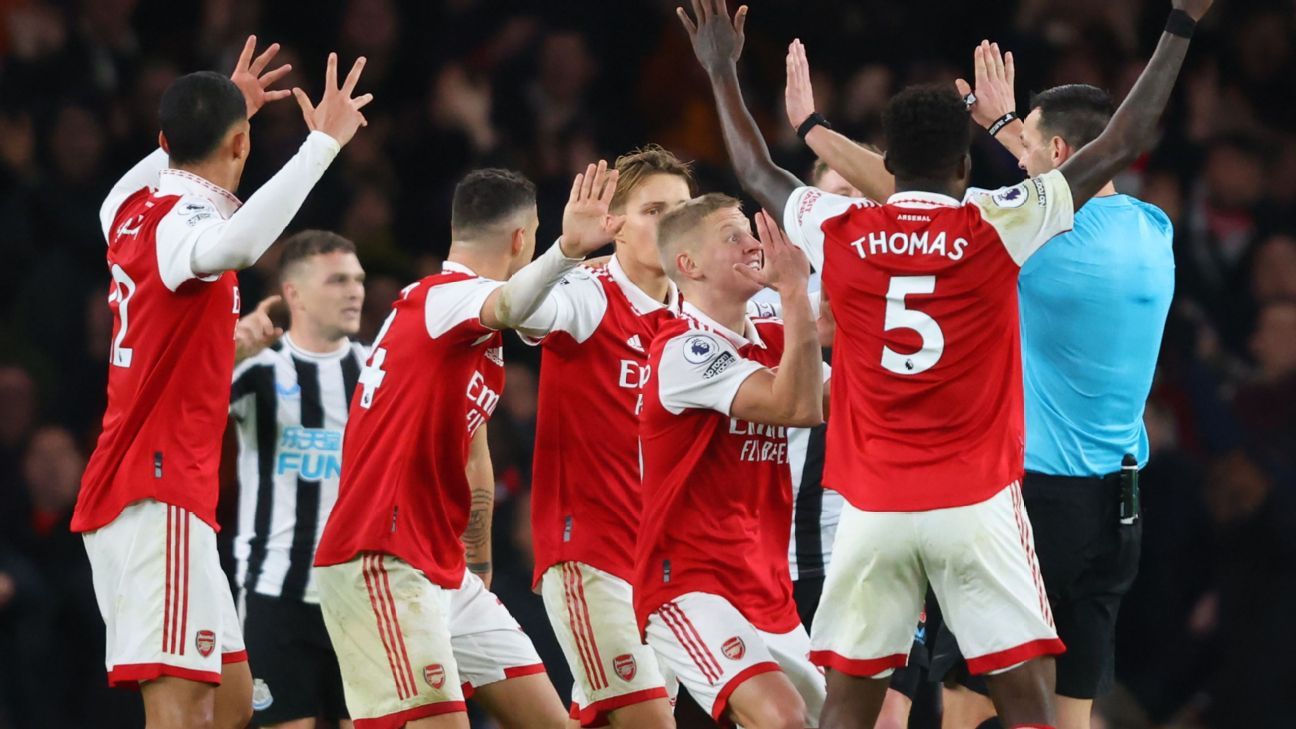 Arsenal manager Mikel Arteta blasted what he called two “scandalous” penalties not being awarded to his team as the Premier League leaders were frustrated in a goalless draw with Newcastle United on Tuesday.

The draw was the first time Arsenal had dropped points at the Emirates Stadium this season as they missed the opportunity to go 10 points clear of second-placed Manchester City.

Arteta expressed his anger on the touchline after Arsenal were denied a penalty in stoppage time when the ball struck the arm of Newcastle defender Jacob Murphy in the box. Arsenal also had an earlier penalty appeal waved away by referee Andy Madley when Dan Burn pulled the shirt of Gabriel at a corner.

“I’m really proud, the way we played, the way we dominated the game, the approach that we had from the beginning,” Arteta said.

“We lacked that spark in the final third to find that opening, to find the right moment an extra pass and a little bit the finishing quality. But we had a lot of situations in and around the box to do better and then there were two scandalous penalties.”

Asked whether he was more aggrieved by the late penalty appeal in particular, Arteta responded: “Both of them, it’s not particular. It’s a penalty or not a penalty and it’s both penalties.”

Newcastle manager Eddie Howe, though, had a different view and added that there was no issue between he and Arteta despite the two confronting each other on the touchline as tempers boiled over in the final minutes.

“Obviously at that stage of the game you’re thinking please no, the lads have given so much,” he told Sky Sports. “That would have been a travesty for us.

“I didn’t think it was a penalty just because of the proximity, but you just never know. Me and Mikel, it was fine.”

Manchester City, who sit a point above third-placed Newcastle with two matches in hand, will now have the opportunity to cut Arsenal’s lead to five points when they visit Chelsea on Thursday.

Still, despite ending a run of seven-straight home wins in the league to start the season, Arteta insisted he does not feel that Tuesday’s result was a case of two points dropped.

“It’s not that, it’s not about the feeling,” he said. “I think the team was on top of it. We were really chasing it, we were really wanted it. “You could see that the team was putting everything in to take the three points. We lacked that in the final third and we lacked the big decisions.”