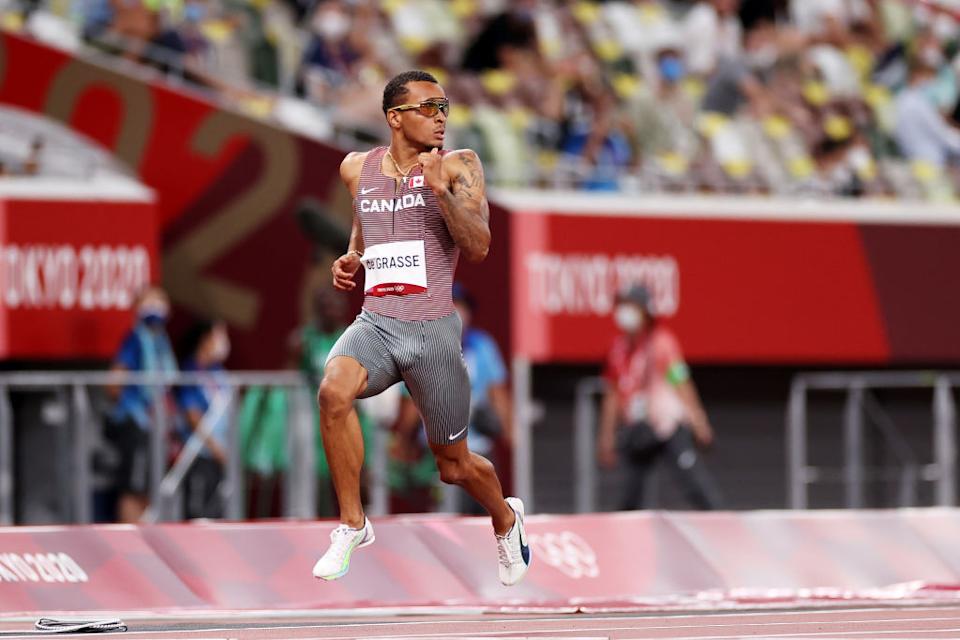 Andre De Grasse just keeps getting faster at the Olympics.

And now he’s eyeing his second medal in Tokyo and the fifth of his Olympic career.

The 26-year-old from Markham, Ont., burned up the Olympic Stadium track on Tuesday night, sprinting to a personal best and Canadian record in the 200-metre semifinal on a scorching evening in Tokyo.

His time of 19.73 seconds was the fastest of the night.

“It’s amazing. It’s always great when you have a personal best. For me, I just want to go back out there and get on the podium. That’s what matters to me the most. That’s my mission for tomorrow,” De Grasse told CBC Sports.

Aaron Brown ran a season best time of 19.99 to collect his semifinal and book a ticket in the title race with De Grasse.

“I feel good. I came to this championship rested. That’s why I sat out the 100-metre so I felt ready to go, to give myself a chance and get into the final,” Brown said.

“Won my heat. It’s going to be a fast one tomorrow. Have to rest up and do it again tomorrow.”

Heat and humidity have been a story at the track throughout the opening days of the competition, with temperatures soaring to nearly 40 C.

There was no wind and 70 per cent humidity while the sprinters took to the track on Tuesday night.

De Grasse has been pushed mentally and physically through his first five sprints in Tokyo. Not only has he battled the scorching conditions, but he’s also had to endure five false starts over the course of his races.

The four-time Olympic medalist was evidently fatigued and seemingly frustrated with his performance Tuesday morning, placing third in his heat in 20.56 seconds.

He explained what happened leading up to his heat after his semifinal success.

“I just needed one more sleep. We woke up at 6 a.m. to catch the bus at 7 a.m. to come out here in the morning. It was blazing hot. I think it was about 40 degrees outside,” he stated.