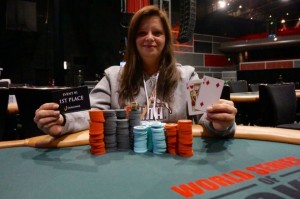 Check Regal Poker for Latest Poker News, poker strategy tips and more.
(pokernews.com)- The World Series of Poker Circuit, which is in its 12th season, kicked off its stop at the Horseshoe Casino in Hammond, Indiana, which is just outside the Chicago city limits. The stop, which will award 12 rings, kicked off with Event #1 $365 No-Limit Hold’em Reentry, a tournament that attracted 2,211 entrants and created a prize pool of $663,300.
The WSOP Circuit visited the venue for the eighth-consecutive year, but for the first time in history the opening $365 reentry event hosted a third starting day and allowed for unlimited reentries. As such, Flight A attracted 536 entrants (64 survivors), Flight B 675 entrants (86 survivors), and Flight C 1,000 (113 survivors).
That meant 263 players returned for Day 2 action, but only 225 were slated to get paid. After the bubble burst in Level 17, the in-the-money finishes began to mount and included Wendy Freedman(196th – $776), Ashor Ochana (156th – $842), Joe Hebda (104th – $995), Quang Pham (43rd – $1,983),Josh Turner (15th – $7,170), and Donald Kerr (10th – $8,756).
At Regal Poker you will find the best articles about how to play poker, visit us and check out our promotions we offer you the best online poker games.
In the end, after four days of intense play, Illinois amateur Amanda Heidbrick walked with the $101,190 top prize.
“It feels great,” Heidbrick said after the win. “I just felt I was running good on Friday and I was hoping to continue to run good.”
Prior to the win, Heidbrick had just two cashes on her poker résumé, the first being $1,079 for a ninth-place finish in the 2009 WSOP Circuit Hammond Ladies Event, and the other $1,229 for a 56th-place finish in the 2012 Chicago Poker Classic $240 No-Limit Hold’em Reentry.
Final Table Results

The WSOP Circuit Horseshoe Hammond will continue this week with other ring events, though the highlights are without a doubt a $5,300 High Roller – the first of its kind in the Circuit’s modern era – and a $1,675 Main Event, which begins Friday, October 22.

What is “Spanish” Blackjack?

What is a Range Merging Player?