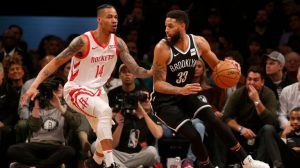 Brooklyn Nets swingman Allen Crabbe hasn’t played since a Dec. 12 victory over the Philadelphia 76ers, and he will miss more action with his right knee injury.
Bryan Fonseca of Nets Daily shared an update from the team indicating the soreness in Crabbe’s knee has worsened. As a result, he will be re-evaluated in one to two weeks before the Nets decide on a time frame for his return to action.
Fonseca noted head coach Kenny Atkinson said “we’re not at that point yet” when asked if Crabbe will require surgery.
Crabbe has appeared in 28 games this season and is averaging 9.5 points, 3.5 rebounds and 1.1 assists a night. He is also shooting 38.7 percent from three-point range and is someone the Nets rely on to take advantage of openings on the perimeter when defenses collapse on D’Angelo Russell, Spencer Dinwiddie and others.
Check BetRegal.com and find the best online betting site.
The California product posted a career-high 13.2 points and 4.3 rebounds a night last season, his first with the Nets after spending the first four years of his career with the Portland Trail Blazers.
Brooklyn is just a half-game behind the Detroit Pistons in the race for the No. 8 seed in the Eastern Conference and returns to action Wednesday against the New Orleans Pelicans.
Crabbe signed a four-year, $74.8 million deal with the Portland Trail Blazers in the summer of 2016. Portland then traded him to the Nets in 2017. He is making $18.5 million this season and has a player option worth $18.5 million for next year.
Get all the latest Betting and Sport News updates on your social media outlets. Find us on both Facebook and Google+
The six-year NBA veteran is third on the Nets in 3-point percentage. He spaces the floor well for Brooklyn, which allows point guards D’Angelo Russell and Spencer Dinwiddie to drive to the basket. Brooklyn is hoping they can get Crabbe back into the lineup soon.