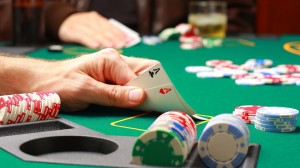 Check Regal Poker for Latest Poker News, tips and more
Before you can master the game of poker, you need to get familiar with all the poker terminology and slang words used by the global poker playing community. So let’s continue.
Regal Poker is the best online poker game website, visit us and check out our promotions.
Active Player
A player still involved in a hand.
An “active” player is any player who has been dealt in, and has not thrown his hand away or had his hand fouled, and therefore will have an opportunity to act on his hand. When the hand is initially dealt, all players who are dealt in are considered active players. As the hand progresses and players throw their hands away, the number of active players decreases. If nobody mucks after the flop, the number of active players will not decrease, but instead will remain the same. The number of active players can never increase during the course of play. Once a player throws their hand in the muck they are no longer considered active.
An active player is not the same thing as an “action player.” An “action” player is a player who bets and raises frequently.
There are two ways a player can go from active status to non-active. The first way we covered, which was for the player to throw his hand away. The second way to lose your active status is to have your hand fouled. A fouled hand is dead and cannot play. It is often necessary to call the floorman to make the ruling at to whether the hand has indeed been fouled and will therefore be ruled dead. If the floorman rules that the hand is dead, the dealer must bring the hand into the muck to kill it.
Poker Etiquette
If you are not an active player, do not discuss the hand being played, especially if someone is all-in and someone is pondering a call. If you are mulling your action after an opponent bets, do not discuss the hand, your cards, or the bettor’s possible cards if there are still other active players. These transgressions can unfairly influence others’ actions.
Side Pot
If a player is all-in, it is possible for him to be both an active and inactive player. If he is called by more than one opponent with more chips than he has, there will be a side pot between those opponents. The all-in player is an active player in the main pot, but an inactive player in the side pot.
Calling the Clock
While legal, it is generally considered poor form to call the clock on someone if you are not an active player. There can be extreme cases where it is ok, but most of the time, it is wise to just butt out of other players’ pots.
Get all the latest PokerNews updates on your social media outlets. Follow us on Twitter and find us on both Facebook and Google+!