Aaron Rodgers is off for Thrusday`s Game 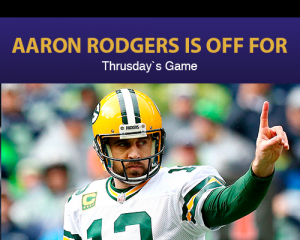 The experienced and shine quarterback will not play this coming Thursday against Philadelphia Eagles and instead the rookie Brett Hundley will take care of leading Packers to the first preseason win. Last year, Rodgers only played the third game of preseason and started the season with all his guts. Hopefully, Hundley will overcome an injury that happened last preseason on the ankle and made him stepped away of the two other games. During the Monday training sessions, it was Hundley who trained with the official offensive line. Last Saturday, he threw a long drive to the hands of Richard Rodgers for the best action of the whole night, reason to think that this coming season will be a great opportunity to revert his last contract with Packers to a bigger deal since his membership as rookie will expire soon.
Get all the latest Sports Betting updates on your social media outlets. Find us on Facebook!
For Rodgers the preseason is just a phase to be ready. His actions got cut imperative for preseason since 2013. Last season, he only played one game and in total he has played five games in this period. So definitely, is a good hint for Packers in having a promise in their bench. Remember that Rodgers is 33 and can be replace in the next years to follow or can be a good substitution in the regular season in case Rodgers get injured.
With so many different competitions, punters always have some betting material. This makes it easier to find good spots to get our money down. If this makes you feel more confident on getting started, go ahead, sign up at BetRegal.com
In regards to Hundley, he and the Packers need to create interest on the player since in 2019, he can become a free agent. Hundley stats are 65 passes and 129.6 passer rating during the preseason as a rookie year. For 2016 offseason he was injured and severely stopped his future and the willings of coach McCarthy who said to the press on Monday: ““Preseason games, really, you direct the gameplan to everybody that is playing,”

Ernesto Frieri sold to the Rangers