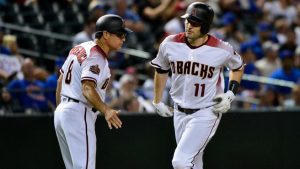 The Dodgers have reached an agreement with free-agent outfielder A.J. Pollock, The Athletic’s Ken Rosenthal reports. According to multiple reports, the two sides agreed to a four-year deal will be in the $55-plus million range and is filled with various incentives and escalators.
The 31-year-old Pollock, who ranked No. 4 on our list of top free agents this winter, authored a .257/.316/.484 batting line with 21 home runs in 113 games for the Arizona Diamondbacks in 2018. He’s played in only 469 of 810 possible games the last five years due to various injuries.
The addition of Pollock ultimately helps solidify a 2019 Dodgers outfield that will be without Yasiel Puig and Matt Kemp, who were both traded to the Cincinnati Reds in a blockbuster, seven-player trade in December. After this move, the Dodgers are now projected to win 101 games (100.6) via SportsLine simulations and have a 34.3 percent chance to return to the World Series with a 19.1 percent chance to win it all.
Check BetRegal.com and find the best online betting site.
Pollock will probably spend most of his playing time in his usual position of center field, and the rest of the Dodgers outfield will be some combination of Chris Taylor, Cody Bellinger, Enrique Hernandez, Joc Pederson, Andrew Toles and/or top prospect Alex Verdugo. Pollock’s presence should give Los Angeles a decent power and speed boost toward the top of the lineup, and add a right-handed bat in a heavy lefty lineup.
Pollock, who made $7.75 million in 2018, rejected Arizona’s qualifying offer — $17.9 million — to make a go at free agency. He is the latest longtime D-Back to leave the organization as the team appears to be embracing a full rebuild. Former first baseman Paul Goldschmidt was traded to the St. Louis Cardinals, while starting pitcher Patrick Corbin signed with the Washington Nationals.
Get all the latest Betting and Sport News updates on your social media outlets. Find us on both Facebook and Google+