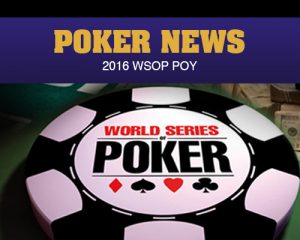 If you can believe it, the 69-event 2016 World Series of Poker is already heading down the home stretch, with less than a week left before the start of the $10,000 Main Event this Saturday. It seems like things just got started!
Of course, when it comes to the 2016 WSOP Player of the Year race, that, too, might have felt like it was over shortly after it began, thanks to Jason Mercier’s blistering start that included two bracelet wins, a runner-up, and a couple more deep runs.
If you want to learn more about poker, don’t forget to visit our How to play section!
Mercier is up to 10 cashes total now, and currently enjoys a whopping 750-plus point lead overBenny Glaser who has also won two bracelets this summer. In fact, Glaser’s impressive POY points total isn’t even two-thirds what Mercier currently has.
Here’s a look at the current top 10 as reported by the GPI this morning:

Ready for start winning at poker? Bet NOW!
Incidentally, Mercier presently sits in a four-way tie for first in total cashes at this summer’s WSOP.Roland Israelashvili, Dan Kelly, and Ryan Laplante also have 10 cashes apiece so far.
Max Silver has yet to make a final table this summer, but he came close twice last week to push his total cashes to nine and move into the third spot on the POY leaderboard. Meanwhile Michael Gathy has only four cashes, but he’s made the most of them with no less than two runner-up finishes and a victory in Event #35: $5,000 No-Limit Hold’em Six-Handed.
Stephen Chidwick continues to collect cashes — he’s up to eight currently now to claim a spot inside the POY top five. Michael Semenov sits in sixth with his seven cashes, while Mike Watson moved up into the top 10 this week after grabbing three more cashes and adding to points he earned by taking runner-up to Mercier earlier this summer in Event #16: $10,000 2-7 No-Limit Draw Championship.
Randy Ohel has had three near-misses this summer in his quest for second career bracelet, taking second, third, and fourth in events to help him move to eighth in the POY race. Eli Elezra has been steadily making the money in events all summer as well to claim the ninth spot, while bracelet-winner Martin Kozlov sits in 10th.
Sitting just outside the current top 10 this morning are Loren Klein (#11), Chris Ferguson (#12),John Monnette (#13), Justin Bonomo (#14), and Laplante (#15).
A reminder — with no WSOP visits to Europe or Asia-Pacific this year, the 2016 WSOP POY race will be entirely determined by open bracelet events played in Las Vegas.