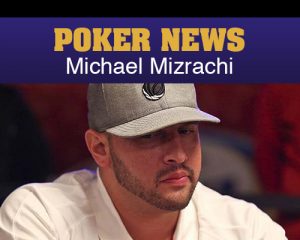 Find your daily dose of articles with our online poker news!
On Day 35 of the 2016 World Series of Poker, one man continued his push for history as Michael Mizrachi once again advanced to the $50,000 Poker Players Championship final table. Meanwhile, three other events ended with gold bracelets awarded on the busy day at the Rio All-Suite Hotel & Casino.
If you want to learn more about poker, don’t forget to visit our How to play section!

Michael Mizrachi, the only player to win the $50,000 Poker Players Championship twice, is on the cusp of adding a third Chip Reese Memorial Trophy to his collection. At the end of Day 4, he sits in second place to Justin Bonomo with an official final table of six having been determined.
Here are the remaining chip counts and seating assignments:

Brian Rast is the other former winner still in the hunt. Last year’s champion, Mike Gorodinsky, was one of the 13 players who started the day with chips. He was the shortest of the remaining stacks though, and busted to Rast in a 2-7 triple draw pot early in the day.
Ready for start winning at poker? Bet NOW!
Bonomo, for his part, continues to dominate the event, as he has now finished as the chip leader each of the past three days.
When the final table gets underway, betting limits for limit games will be 100,000/200,000, so short stack Ray Dehkharghani, who won the $10,000 Razz Championship just weeks ago for $273,338, will have less than two big bets.
Play resumes at 2 p.m. for the fifth and final day.

What is Razz Poker?