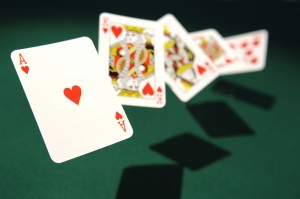 Check Regal Poker for Latest Poker News, poker strategy tips and more.
(pokernews.com)- Aussie Kevin Blackwood made a miraculous comeback heads up to win the opening event of the2016 Aussie Millions Poker Championship and its $275,300 first-place prize at Crown Entertainment Complex on Monday.
Phachara Wongwichit dominated the final table, taking a 5-1 chip lead into heads-up play, but could not beat Blackwood, who also took home an exclusive LK Boutique Aussie Millions Championship ring by ultimately defeating a field 1,320 players put together over four starting flights this week.
The event’s third and final day began with 17 players at 12:30 p.m. Monday and was quickly whittled down to nine with German Ferenc Riech going from chip leader to the final table bubble in a big hurry.
The final nine began with American Jacob Elmore Dahl and Brit Louis Salter in a dead heat for the chip lead and Wongwichit close.
At Regal Poker you will find the best articles about how to play poker, visit us and check out our promotions we offer you the best online poker games.
Salter would soon separate himself from the pack with some aggressive play and it would take two 60-minute levels before the first player was felted. Finally, Patrick Fletcher shoved a weak ace and Wongwichit called with a small pair, holding to send Fletcher home ninth and take the lead.
Canadian Sean Giesbrecht then ran kings into Sinan Aydogan’s aces and spiked a king on the river to double through. Aydogan exited eighth a few hands later.
A short-stacked Dahl jammed eights on an six-high flop into Alexandre Thomas‘ set of threes to say goodbye seventh.
But it was Thomas himself who busted sixth, running a weak ace into Wongwichit’s strong one, leaving Wongwichit with more than four million chips five handed.
Stephen Koutsouvelis busted fifth when he lost a coinflip versus Blackwood’s pair and Giesbrecht was the next player out, becoming yet another to run a weak ace into Wongwichit strong one.
Wongwichit had over seven million chips when three-handed play began, and when he busted Salter third, getting lucky with a dominated ace of his own, he took a 5-1 chip lead into heads up play with Blackwood.
Within an hour, Blackwood had turned things around and taken the lead himself, running extremely hot and pummeling Wongwichit into virtual submission to secure his first Aussie Millions title.
[I]Final Table Results/I]

Nam Le Wins the Shot Clock Shootout
Aussie Nam Le took down the $1,150 Shot Clock Shootout at the 2016 Aussie Millions Poker Championship on Monday.
The winners of Sunday’s 14 shootout tables returned to the Crown to two seven-handed tables Monday, and once the final four on each were reached, the field was combined to a final table of eight.
Le started the final with a dominating chip lead and never really looked back.
A deal was reached three handed, leaving $3,000, an LK Boutique ring, and the title to play for. FinnRoope Salminen finished in third place and Le beat fellow Aussie Geoffrey Mooney to earn the victory, collecting $30,215 in prize money.
I]Final Table Results/I]

$1,150 PLO Draws 217
Event #4: $1,150 Pot-Limit Omaha drew 217 entries at the Crown Poker Room Monday, creating a $222,425 prize pool that will pay 24 spots.
An LK Boutique Aussie Millions Championship ring and $54,500 in prize money is reserved for the winner. The event will play down to a winner Tuesday.
$1,150 Mix-Max Event Kicks Off
Event #5: Mix-Max No-Limit Hold’em kicked off just after 6 p.m. at the Crown Entertainment Complex Monday.
This unique event was played full ring until the final 36 players remained, then played six handed down to the final eight.
Those eight finalists will return to Crown Tuesday to play a heads-up tournament to determine a winner.
The 2016 Aussie Millions Poker Championship Continues
The 2016 Aussie Millions Poker Championship will continue on Tuesday, Jan. 19, with the final day of the Event #5: No-Limit Holdem Mix Max where the final eight players remaining in the event will play a heads-up tournament to determine a champion beginning at 1 p.m.
The final table of Event #4: $1,150 Pot-Limit Omaha will also play out starting at 1 p.m.
Tuesday will also see the start of Event #6: $1,150 6-Max No-Limit Hold’em at 12:10 p.m. This is scheduled as a two-day tournament.