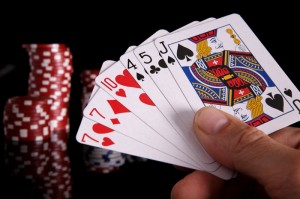 (pokernews.com)- The 2015 World Poker Tour UK £5,250 High Roller kicked off on Monday evening after a delayed start due to adverse weather conditions gripping many parts of the United Kingdom. When play did commence, the light and energy given off by some of the world’s top poker talent burned a hole through the fog and dazzled everyone inside Dusk Till Dawn.
Play started with 16 players in their seats, a figure that increased to 29 by the time Day 1 drew to a close. The total attendance should rise higher because players are permitted to reenter, or buy-in for the first time, up to the end of the first level of play on Day 2.
At Regal Poker you will find the best articles about how to play poker, visit us and check out our promotions we offer you the best online poker games.

A total of 23 players managed to progress to Day 2, but nobody managed to accumulate more chips than Steven Warburton. If his name sounds familiar, it is because the talented youngster recently finished as runner-up to John Juanda in the European Poker Tour Barcelona Main Event. After bagging up an impressive 149,000 in chips from a 50,000-chip starting stack, Warburton looks on course for yet another deep run in a major live poker tournament.
Hot on Warburton’s heels was Simon Deadman, who finished the night with 148,100 in chips. Deadman won a large pot halfway through the day’s proceedings, committing his stack with a full house when his opponent, Terry Jordon, had made a worse full house.
Aido failed to advance on his first attempt.
As the end of play drew near, Jordon flopped a straight at the same time as Tamer Kamel flopped a set. All of the chips went into the middle and, when the board didn’t pair, Kamel bused. With that, Jordon ended the night with 108,300 in chips, and he is one of only three players to start Day 2 with a six-figure stack.
American star Jason Wheeler struggled to travel from Amsterdam to Nottingham due to the his plane being diverted, yet had a fruitful session at Dusk Till Dawn and he will return to Day 2 with 85,400 in chips.
Other notables to progress to Tuesday’s Day 2 included William Chattaway (92,900), Paul Newey(84,600), Sam Trickett (56,000), Adrian Mateos (48,500), Tom Hall (45,700), Ben Dobson (29,300), and Richard Kellett (28,800).
Play resumes at the later-than-advertised 1 p.m. local time and will continue until a champion is crowned.
Will Warburton go all the way? Can Deadman build on a great start? Or will one of the chasing pack emerge victorious?
Don’t miss our special articles about Texas Hold’em and blackjack, become the best player that you can be! Get all the latest PokerNews updates on your social media outlets. Follow us on Twitter and find us on both Facebook and Google+!

Plan Your Moves In Limit Hold’em