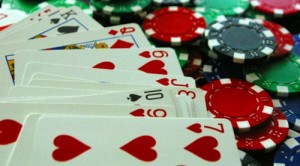 Check Regal Poker for Latest Poker News, poker strategy tips and more.
(pokernews.com)- The Mid-States Poker Tour drew 128 players on Day 1b of MSPT Grand Falls, pushing the total to 238, well above last year’s total of 201. When the day’s 14 levels ended, Chuck Costanzo stood atop the heap with 191,000. In all, 31 players made it through, joining Day 1a’s 23 survivors to make a Day 2 field of 54.
Costanzo already had a big stack late in the night during Level 13 (1,000/2,000/300) when he solidified his lead. Mike Lang opened for 4,500 under the gun and got one call in middle position before Costanzo made it 13,000 from the small blind. Costanzo quickly tossed in 25,000, and Lang folded. The middle player said he was all in, and Costanzo snap-called.
At Regal Poker you will find the best articles about how to play poker, visit us and check out our promotions we offer you the best online poker games.
“DQ” Dan Hendrickson, who won MSPT Canterbury Park earlier this year, also made it through with a nice stack, 128,500. Sam De Silva (121,000), Matt Kirby (118,500), Aaron Johnson (86,500), Josh Reichard (69,000), and Lance Harris (66,500) also punched Day 2 tickets.
Kirby, a sponsored MSPT Team Pro, grinded a short stack the majority of the day. Things finally broke his way in the final level. Kirby overbet all in on a king-high straight board and took down about a 60,000 pot when his opponent mucked. Kirby already has two MSPT titles and seeks an unprecedented third.
Players falling during Day 1b included the aforementioned Lang, Mark Fink, Jeff Bryan, Duane Gerleman, Joseph Stiers, John Hayes, Ervin Bjerga, and Mike Ross.
Day 2 commences at 10:30 a.m. local time and will play down to a champion who will pocket $64,655.
Top 10 Day 1b Chip Counts

Don’t miss our special articles about Texas Hold’em and blackjack, become the best player that you can be! Get all the latest PokerNews updates on your

How To Play Short Stacked

What a Side Pot is?